The display_lock is locked by the vout thread for long periods of time. In particular, it is held while waiting between the calls to the vout display module callbacks prepare() and display(), to avoid display state changes (like display dimensions).

As a consequence, other threads could not acquire the lock in a timely manner (including from the UI thread), causing important concrete issues, among which:

In summary, the vout thread loop consists in the following steps:

The picture is prepared in advance because the preparation time may vary a lot, which could cause the picture to be displayed at an inaccurate time.

It is not possible to "just" release the lock between the vout display ops prepare() and display():

However, the whole preparation is composed of several steps:

For illustration purposes, here is a graph showing the time taken by SPU rendering and vout display prepare() with an OpenGL vout (already posted here). In this example, the prepare() duration is small and stable, and consists mainly in texture upload (which we plan to move to an earlier step): 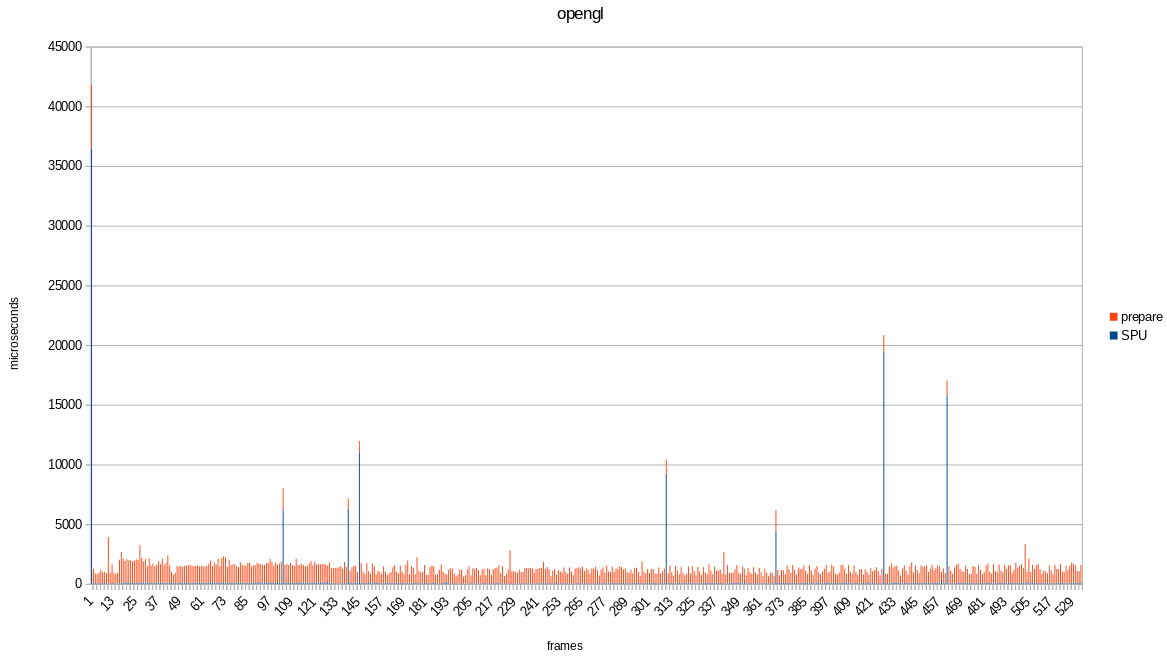 There are now 2 separate waitings (the grey rectangles).

The first one is expected to be long to absorb the variability of SPU rendering duration. While waiting, the display_lock is unlocked, so it does not block other threads from acquiring it. If the display state changes while unlocked, then the current waiting is interrupted immediately, the pre-rendered picture is abandoned and pre-rendering is started again.

The second one (between prepare() and display()) is expected to be short (few milliseconds at most). Its purpose is to attempt to call display() at the expected PTS, while absorbing the prepare() duration variability. If a caller (the UI thread) needs the display_lock (on resize for example), this waiting is interrupted and display() is called immediately to release the display_lock as soon as possible. EDIT: this behavior is abandoned for now, this second wait is not interrupted.

Possible next steps to do: